Over the last few weeks, I’ve been running a few different one or two-session games to introduce one group of players to a few different systems. We recently wrapped up a D&D 5e campaign, and I wanted to give them some experience in other systems before choosing one. Last night, we played Shadowrun – specifically, the Quick-Start Rules that were released for Free RPG Day 2012. The game took two hours, and the entire thing was a trainwreck.

Come with me, and I’ll show you just how much of a complete clusterfuck this game is.

On top of that, you throw in a bunch of modifiers. Are you in cover? Firing a gun at someon in melee? Are you wounded? Are you charging into melee? How easy is it to see where you are ( ie, is it dark, is there gas/steam/whatever )? These modifiers apply to the dice pool, increasing or decreasing the total number of dice you roll. Once you’ve got a dice pool, you roll it and count how many dice are a 5 or 6. You’re either trying to beat a threshold ( usually 2 or 3 ), or get more successes than your opponent.

It’s just that the list of modifiers ( just in the quick-start rules ) is huge. There are 16 different modifiers just for ranged combat. I shudder to think what the full game has as a list of modifiers. From searching around on the internet, the dice pool system is reviled both by detractors and fans of the game.

And then on top of the math to figure out the dice pool, there’s the math that bogs down combat. We’ll get to that later. Apparently the rules for hacking are even worse.

It seems in groups that play regularly the GM will just end up pulling numbers out of their ass ( both for the threshold and for the total dice pool ) because actually looking up what these things should be takes too damn long.

High level: it’s slow. Like, slower than Slowpoke slow. Quick start rules usually come with a sample module, to show off the system and how it works. This is so that you ( or your GM ) doesn’t have to try and come up with their own short adventure, everybody can jump right in and try out the game. For example, Eclipse Phase ( a super awesome game, by the way ) gives you some investigation, two different combat scenarios ( one in zero-g, one on a planet ), some social situations, as well as serving as a pretty good introduction into the Eclipse Phase world and setting. The Shadowrun quick-start module has one thing: a combat encounter in a bar. I’m not even joking.

The player characters walk into a bar, a rookie gang member takes a shot at the Mr Johnson ( quest-giver ) the party is there to meet with, and combat breaks out. The quick start module devotes more text to describing the characters in the bar than to the actual “adventure”. In pretty much every other system I’ve run so far ( D&D 5e, Star Wars, Paranoia, Eclipse Phase ), combat is fairly quick, with battles taking an average of 5-10 minutes. In Shadowrun, this one combat took us 2 hours.

I think the main reason combat takes so long is that there are just so many damned steps.

Let’s compare and contrast with D&D 5e. Let’s take something simple: whacking someone with a sword.

I find the Shadowrun way of doing things overly complex. I understand wanting to go the “armour reduces damage” route rather than D&D’s “armor decreases chance to get hit”. What I don’t understand is requiring the opponent ( most often the GM ) to roll dice to figure out how effective their armour is or isn’t. In this system, you can spend a bunch of money on fantastic armour, and through bad luck always take full damage. That’s ridiculous.

It should have been a warning that there was 5-ish pages on how to run combat. The rules for actually resolving an attack took up nearly a full page – and I’m pretty sure that’s with them trying to cut them down to the bare essentials.

However, they still managed to screw up those pages, because of they left out some information.

What kind of stuff is missing? Just stuff like spell descriptions. Or gear descriptions. Or how about firing modes? You’d think that if they devote two and a half fucking pages to describing how to cast a spell, that they’d include the descriptions and stats for spells.

Each of the characters has at least one weapon. For example, the Street Samurai character has a pistol with a stat line like so:

The rules go over what some of that means. DV is Damage Value ( the P means physical, because argh ). AP is armour penetration. SA is semi-automatic. And here’s where I run out of information, because none of the other things are discussed in the rules. I’m pretty sure BF means burst fire, but I don’t have the rules for that, so no burst fire! RC? What’s that? Good question! Glad you asked. “35c” – no idea what that means. Another weapon has “8(m)", which doesn’t help me figure out what it means. Does an “integral folding stock” or a “smartlink” help a player in any way? I’d love to tell you, but apparently that’s need-to-know information that isn’t important right now so hush.

Two of the characters can do magic. They’ve got a list of spells, like “Missile Parry”, “Mystic Armor”, “Clout”, “Powerbolt”, and “Invisibility”. Want to know what those spells do, and when you can use them? Too bad!

The best part about spell information missing is that there is a side-bar that tells you how to read the spell descriptions.

I think I know why some information is missing though.

How do I know this?

Mostly because they refer to a location that the players don’t enter, from a different quick-start module: 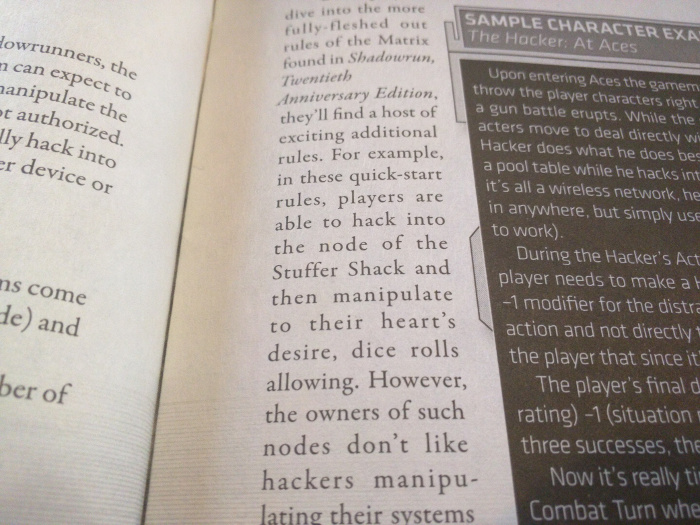 The Stuffer Shack does not appear in the module these rules come with. The module takes place in the diviest of dive bars called “Aces”.

This is the main reason I’m fairly sure this was put together by an intern at Catalyst Labs, because all the other game designers were too busy with “real” work.

The goal of a quick-start book ( although 34 pages strains that “book” description ) is to do two things:

Shadowrun, you failed at both of these things. Miserably.

I was hesitant to run this game because I have heard some bad stories over the years about the rules. Turns out they’re pretty much all true. Shadowrun seems to be trying to be a simulationist RPG, but fails pretty hard. The rules are not that intuitive and take a while to get used to. Combat is slow, unwieldy, and boring – the complete opposite of what it should be. While the setting is awesome ( cyberpunk D&D, what’s not to love ), the system is such a turn off that I don’t think I’m ever going to give it another shot.

On the other hand, apparently the 5th edition of Shadowrun is much better. Maybe one day I’ll give it a shot. But it’s not going to happen any time soon, thanks to this garbage fire of a quick-start module.